Nike: Just (Trying To) Do It

An imposing figure on her staircase in the Louvre, the Winged Victory (Nike) is one of the most famous statues to come to us from the Hellenistic world.  Charles Champoiseau discovered her 150 years ago, and as was the custom of the time, she was taken to the French capital to grace that city. The over-life-size statue of the goddess Nike stands atop the prow of a ship, dwarfing the tallest man. 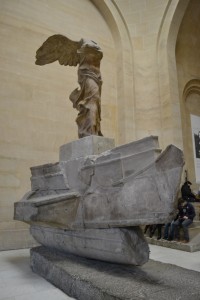 The Winged Victory of Samothrace in the Musée du Louvre

As large as she is, she is far from complete.  Parts of the ship in particular are made of plaster.  Some of the missing pieces, however, are here on Samothrace, discovered in the 1950s and 1980s by American archaeologists.  During the coming months, the curators and conservators of the Musée du Louvre in Paris will be cleaning and restoring the Winged Victory.  We thought it would be the perfect time to see where our fragments fit in!  That’s where I come in.

Like the fragments from the Louvre, some of our fragments are quite obvious and some are little (or a lot) more elusive.  With Dr. Wescoat and the Louvre’s architect, Nichalas Bresch, pouring over the fragments with us on the first day in front of a French documentary film crew, we were able to place a good number of fragments on the ship.  We think we have some exciting discoveries.

Now we are in the process of studying the ship’s large interior block that is here on Samothrace.  It was left behind in the 19th century, but it actually is the most important block for understanding the exact position of the Nike on the battleship. 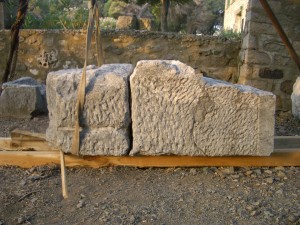 The interior block of the ship outside the museum on Samothrace (photo B. Wescoat)

Looking at these fragments in such detail has greatly contributed to our knowledge of monumental ship representations.  We can see how the ancient craftsmen changed certain designs from the real ships to work better in the stone representation.  This research on the Winged Victory’s ship will aid in the reconstruction of other ship monuments and help us learn more about real Greek warships.