Some Geological Features of Samothrace

Since arriving on Samothrace, I’ve spent quite a bit of my free time wandering along the shore looking for special finds to add to my collection, so the pile of beach stones in my little room at the Xenia has been steadily growing. I hate to admit that I may need to abandon some clothing in order to zip up my suitcase at the end of the month. 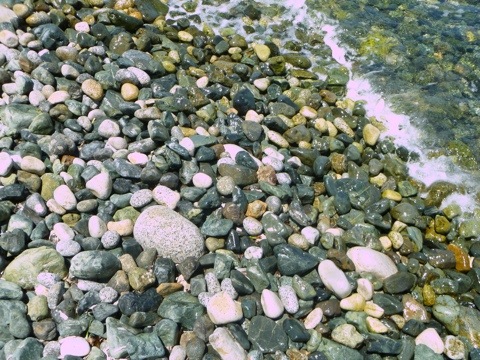 The beach next to the site is a rocky one, and is remarkable in its variety of color and texture. This has led me to do a little bit of reading on the geological features of the island to understand how some of the different types of stone formed, starting way back in the Late Jurassic period. The oldest rocks, dating from around 150 million years old, are metaphorphic rocks like slate and metamorphosed gabbro. Gabbro is a dark, coarse grained igneous rock and is the most common rock making up the ocean’s crust. Some limestone and marble deposits can be found on the island dating from the Jurassic period as well. Just imagine that this is when dinosaurs roamed the earth.

Some of the major types of rock used in art and architecture.

Even though local marble does exist in small deposits on the island, most of the marble that the ancients used in the architecture of the Sanctuary was imported from other parts of Greece. The archeologists here commissioned scientific studies using fragments of the marble monuments to determine which distant marble quarries were used by the ancient Samothracians. This type of provenance testing is called stable isotope analysis. Using readings from a mass spectrometer, the scientist is able to determine the ratio of carbon to oxygen isotopes in the marble sample, which can then be compared to information in an existing database. The study helped to determine that the various marbles used in the Sanctuary were imported from relatively near and far, including quarries on Thasos, Paros, ancient Prokonnesos, as well as examples of the beautiful fine-grained Pentelic marble from Penteli Greece. 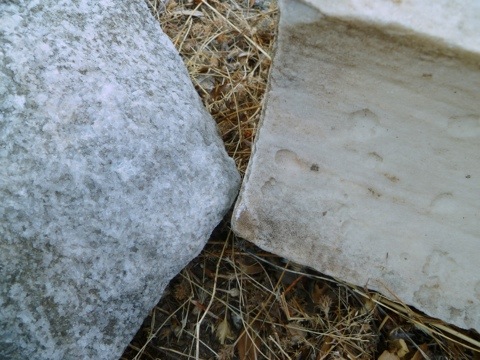 Considering the huge amount of effort and expense that must have gone into importing heavy stone blocks across the Aegean Sea, the ancient Greeks also used local stone for building material. The floor of the Theatral Circle is made from flat slabs of rhyodacite porphyry, which is a grey stone that may look reddish or greenish depending on the exact components of a specific section. It contains large crystals of pink orthoclase, biotite and hornblende, among other minerals. This type of volcanic rock underlies most of the Sanctuary and the Ancient City and similar outcroppings can be found all over the island. The stone is still used for building material today, and it can even be found making up the walls of the Archeological Museum of Samothrace. 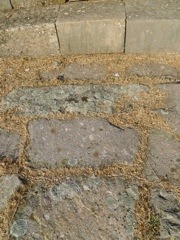 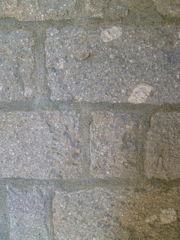 At top, the floor of the Theatral Circle. At bottom, the outer wall of the Archeological Museum.

For more information on the geological make-up of Samothrace see “A Geological Companion to Greece and the Aegean” by Michael Denis Higgins and Reynold Higgins, published by Cornell University Press.

Geology.com is another great resource for basic information on rocks and minerals.