A key element in this season’s project of studying the architectural frame in which the Nike of Samothrace stood is the reconstruction of previous archaeological excavations in the area. Kirsten and I have undertaken this project of “excavating” the excavations of the 20th century. 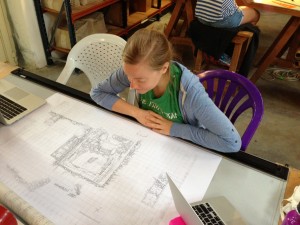 Kirsten looks at the Plan of the Nike Precinct

To begin this work, we read through the old excavation diaries sentence by sentence in order to reconstruct their activities in the Nike Precinct and to map out all the trenches in the area that have already been dug. It was interesting to discover not only the extent of previous investigations that had been undertaken in the Precinct, but also the stylistic development of archaeological discourse over the past century. Both the loquacious excavators of the 1930s and 1950s and the scientific approach in the 1980s have been fascinating in terms of the larger history of American archaeological investigations in Greece. 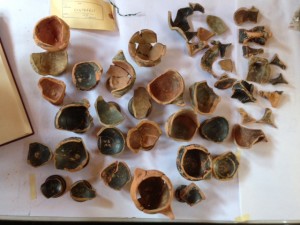 Kantharos Fragments from the Eastern Hill

Before turning to the finds from the Nike Precinct, Kirsten and I familiarized ourselves with the sorts of vessels found in the sanctuary, especially those from the Eastern Hill. While we both specialize in Attic figured pottery from the Archaic and Classical periods, our work on Samothrace has expanded to include vessels of all fabrics from later periods. Among these new shapes, the Samothracian conical bowl stands out as a local yet extraordinary vase shape. These small bowls, found in an astounding number in the sanctuary, must have been essential to the initiation rituals undertaken here. As pottery people, the puzzle of identifying and joining fragments, like those of the stamped kantharoi seen below, is our favorite obsession. 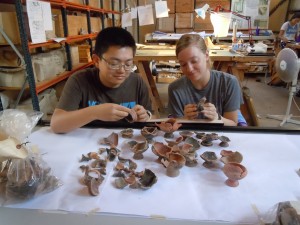 Kirsten and AJ expertizing the pottery

Our goal is to examine all the pottery fragments from the Nike Precinct, paying special attention to those from the trenches that are significant concerning the original structure. So far, we have studied and catalogued all the pottery finds from the 1939 and 1950 excavations. These pottery fragments consist primarily of coarseware from the Hellenistic and Roman periods. The few examples of fineware from the precinct do not survive in very good shape. A second look at these important finds will allow our team to date the phases of construction of the monument and better understand its original appearance. 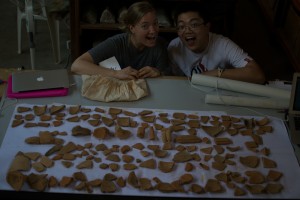 Kirsten and AJ getting excited with the “puzzle” of coarse wares

A full reconstruction and understanding of our archaeological predecessors and their essential explorations of the Nike Precinct and its relationship to the sanctuary will be crucial to the whole team. It is only through a complete understanding of previous excavations that the architecture and small finds can be contextualized.