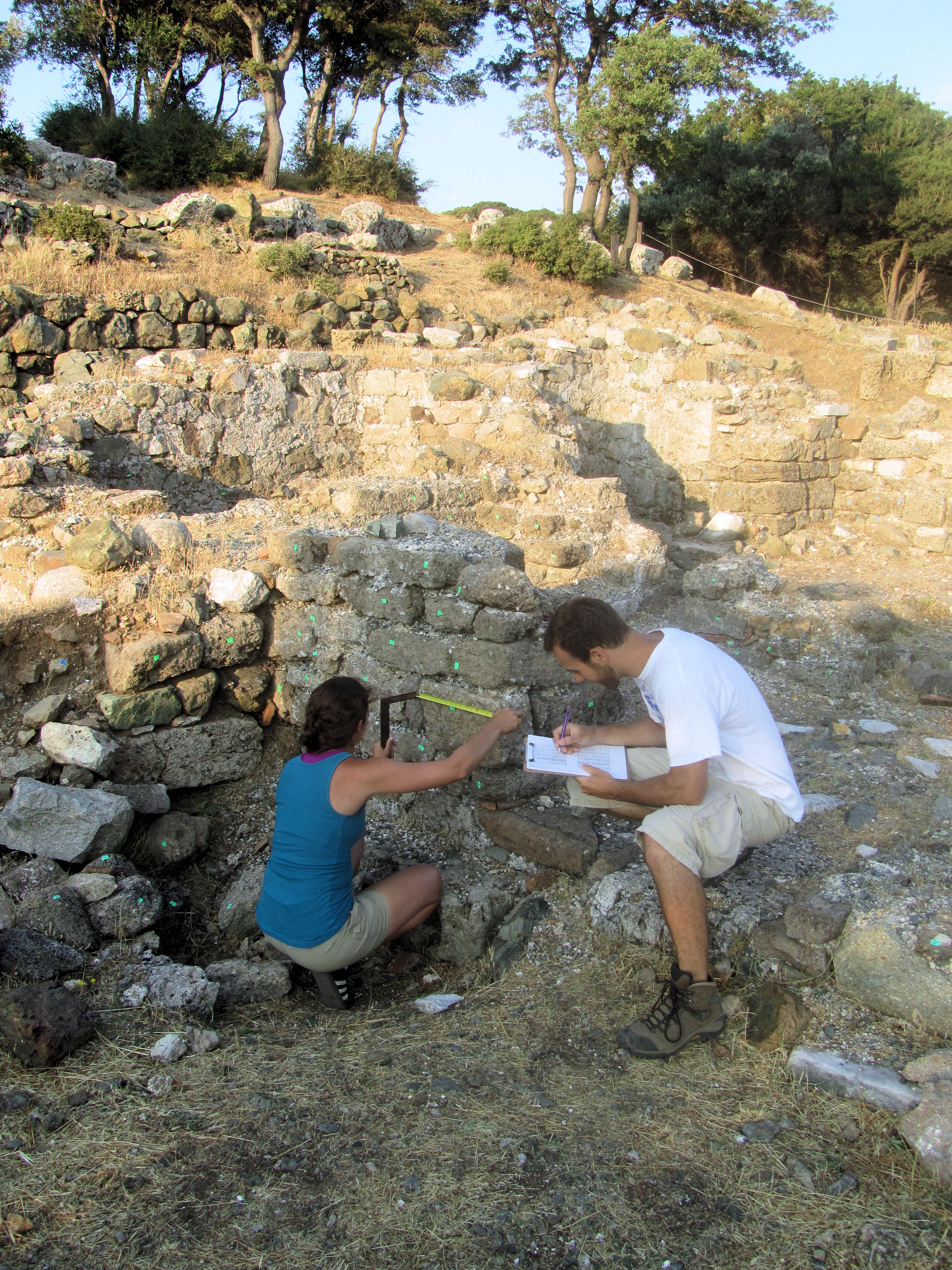 Commanding a majestic view of the central sanctuary, the Winged Victory of Samothrace (Nike) would not have been left exposed to the elements up in her precinct.  We believe that she was surrounded by a superstructure but what this building looked like, or even if it was roofed, remains a mystery.  The superstructure appears to have been made from two different types of sandstone: one medium grained (“calcareous”) and one coarse grain (“calcareous pebbly”).  Very little of it remains in the precinct.

Nike Stone is easy to identify because its texture, color, weathering patterns, and inclusions and it is quite unique as a building material.  Its inclusions (“clasts”) consist of basalt, jasper, quartz, magnetite, and fossil fragments.  After investigating the material of all the buildings which could have been constructed with the calcareous sandstone, such as the Hestiatorion, we concluded that the Nike Precinct is the only known structure containing the calcareous sandstone found in the Byzantine Industrial Complex. 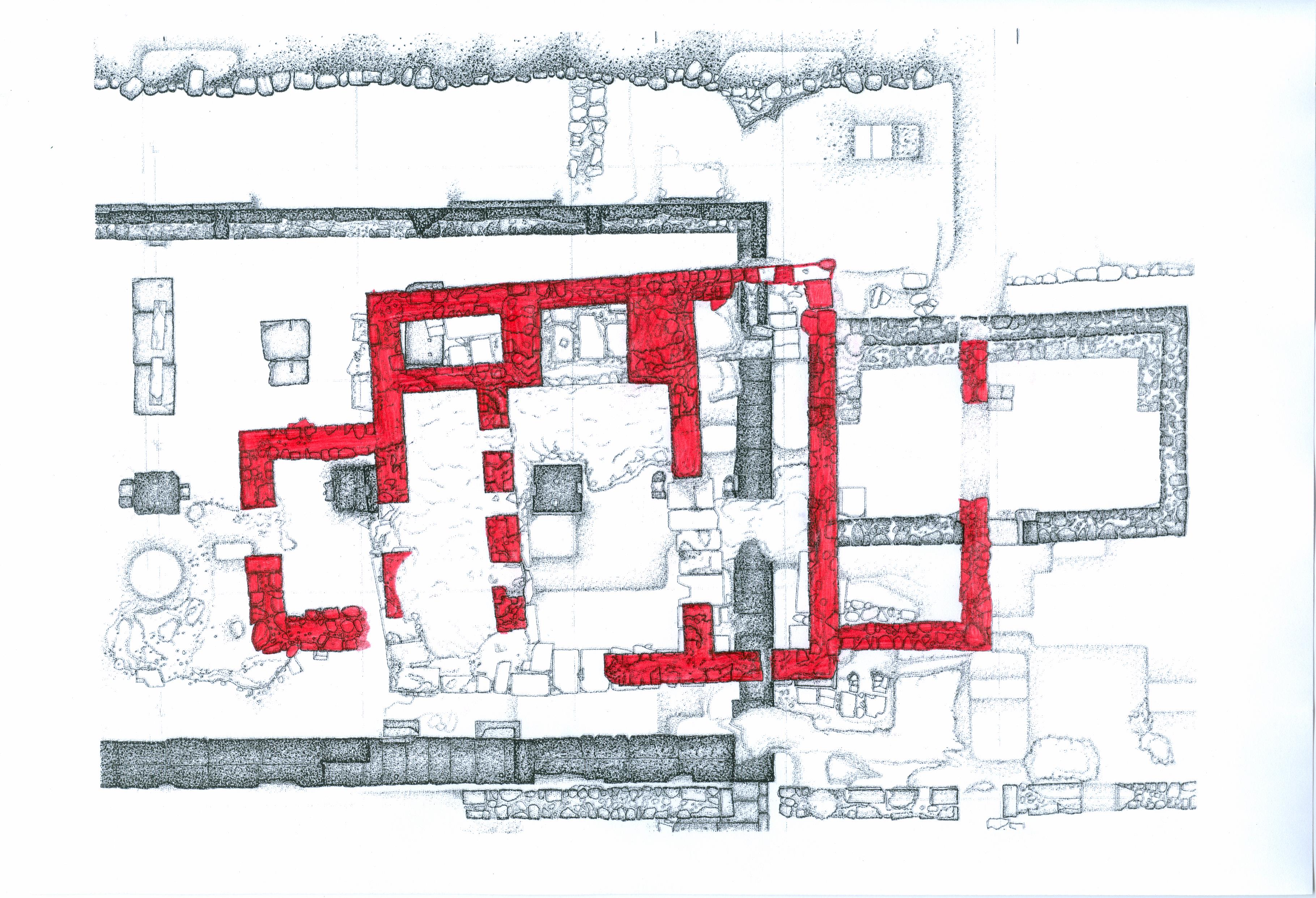 Partial plan of the Western Hill with the Byzantine Industrial Complex shaded red.

The Byzantine Industrial Complex was exposed during the excavation of the Neorion in 1986-1987.  Built in the 10th century C.E., the complex is slightly earlier than the nearby Byzantine fort, although its use was roughly contemporary.  The complex served an agricultural or industrial function; it contains a possible kiln or oven from Late Antiquity in the first phase of the building.  The second to fourth phases of the building are Byzantine.  It likely went out of use during the late 10th century C.E. around the same time as the Byzantine fort.  The final destruction of the building appears to be intentional; it was filled with debris from both itself and the Byzantine fort in an effort to level the area.  The building and debris include fragments of various monuments.  Many stones from the sanctuary were reused in the heavily mortared walls including pieces of sculpture (notably a fragment of the hull of the Nike ship) and inscribed blocks.  While some of the reused blocks in the Byzantine Industrial Complex’s walls originate from the Stoa, Hieron, Propylon of Ptolemy II, and Hall of Choral Dancers, numerous fragments have not yet been associated with a particular building.  We have identified many of these unclaimed blocks as belonging to the superstructure of the Nike Precinct.  The easternmost and westernmost chambers in the Byzantine building have only a few traces of the calcareous sandstone while the central chambers have a significant amount.  It appears mostly in medium sized blocks in the superstructure of the chambers.

Hannah and Zach measuring a Nike Stone in the easternmost chamber.

We began our catalogue of Nike blocks in the Byzantine Industrial Complex by photographing the interior and exterior of each wall.  While photographing the walls, each stone in the complex was analyzed and the ones determined to be the calcareous sandstones associated with the Nike precinct were marked with tape.  The photographs were put into greyscale in photoshop, printed, and taken back up to the site.  Once on site, we traced the blocks in each wall in sharpie to make them more visible on the paper.  We then traced the blocks on tracing paper back in Hall E to get a clearer view of the stone structure of the wall.  After tracing the blocks we noted their worked surfaces and measured the height, width, and length of each marked stones. We took preserved measurements where they were available and visible measurements when mortar or other stones were obscuring the preserved surface.  A total of 535 wall blocks and some stones lying in the surrounding area were measured. We proceeded to catalogue all our notes and measurements of the Nike stones. 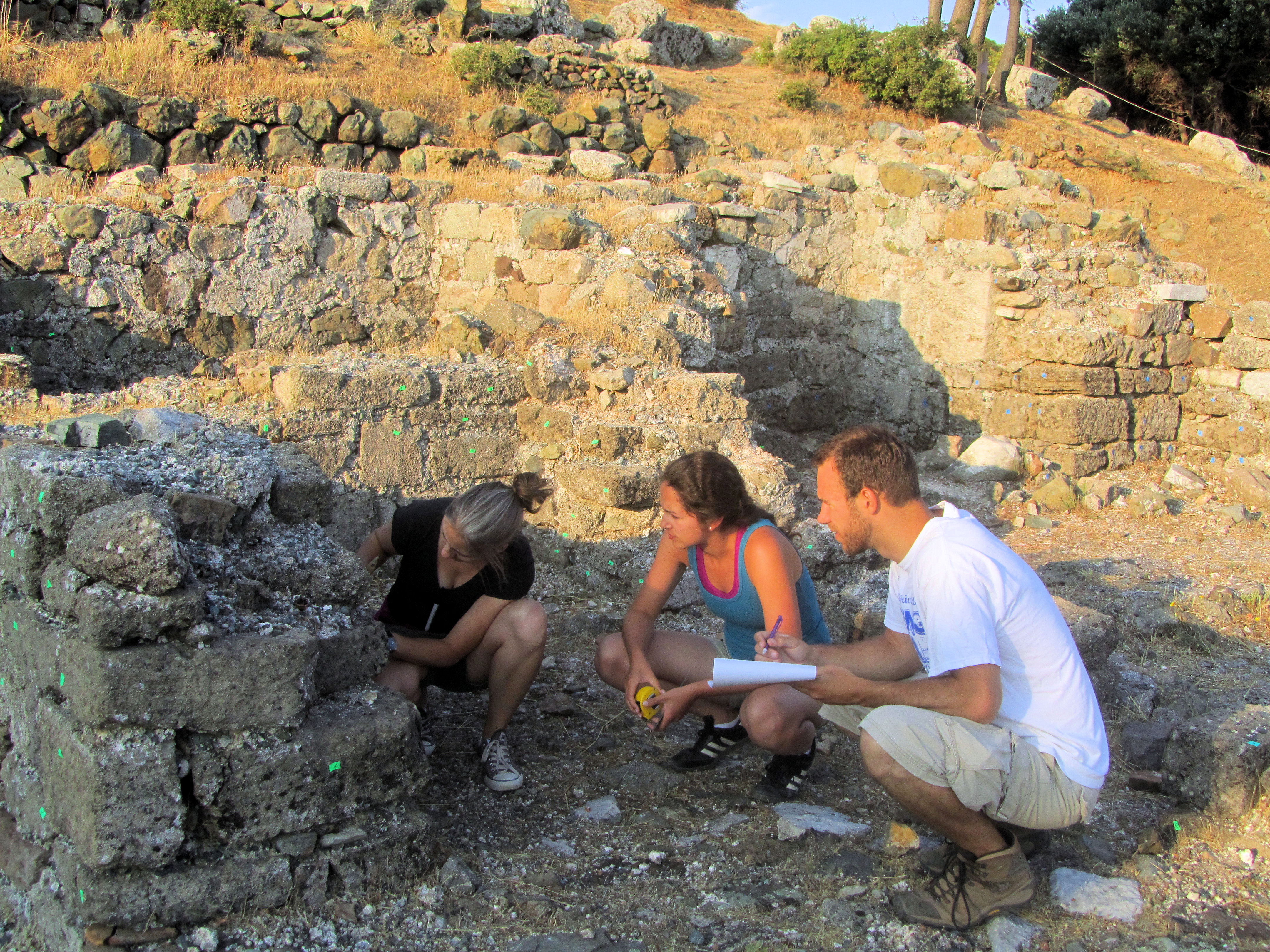 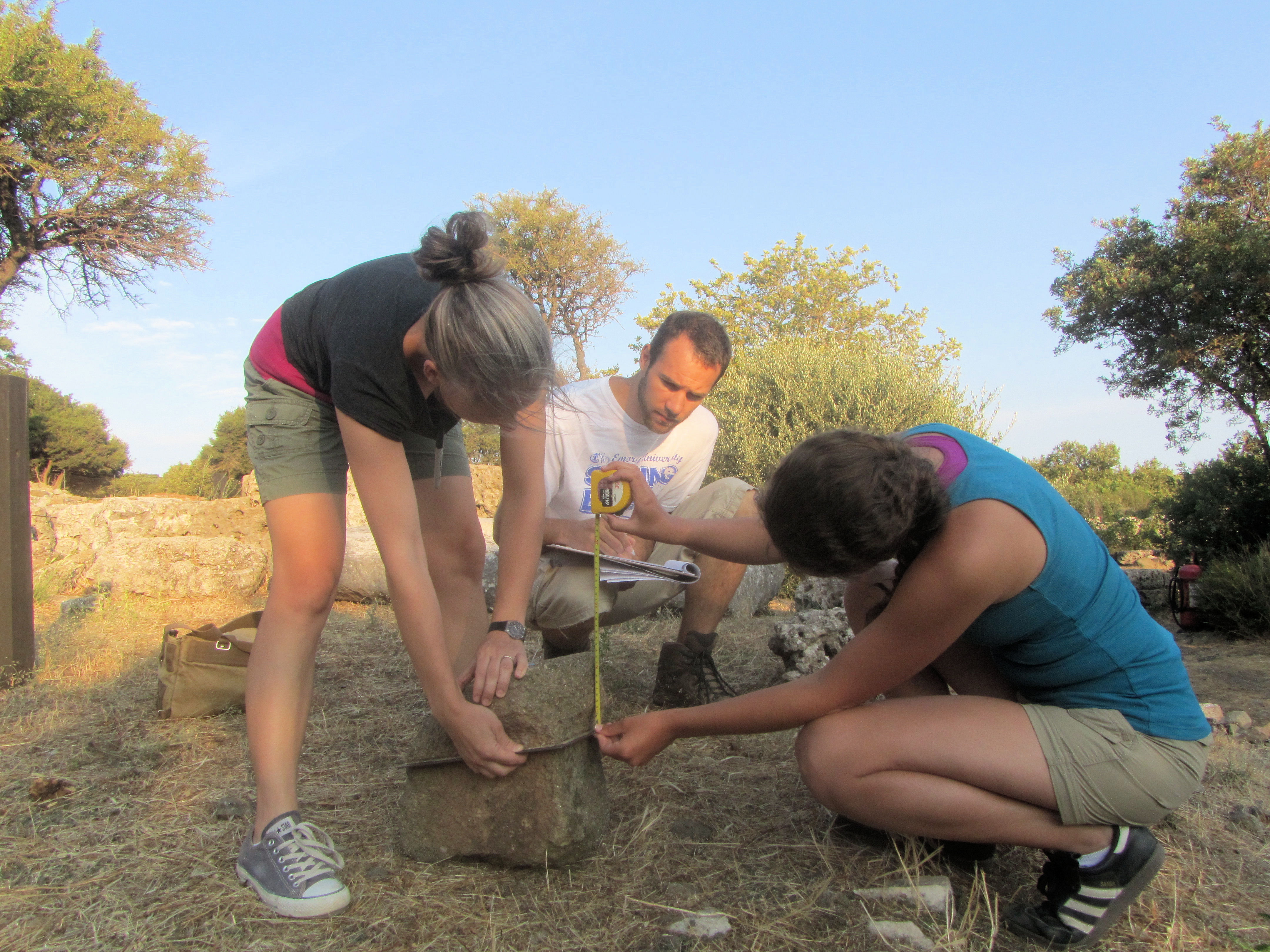 Jess, Hannah, and Zach measuring a Nike stone outside the Byzantine building.