The Topography of Sacred Space

Even a casual glance at the Sanctuary of the Great Gods will reveal that it is situated in a ravine so that the central sanctuary is flanked by one hill to the west and another to the east. How the topography of the landscape enhanced the Sanctuary’s effect on initiates and supplicants is less obvious. In order to understand the relationship between the landscape, the buildings, and the viewer, as well as to obtain highly accurate maps of the site, a Geographic Information System (GIS) survey project of the Sanctuary and surrounding area was instigated several years ago . Although the general survey is now complete many details remain to be filled in.

Much of this season’s investigation revolves around the Nike statue. Consequentially Alexander Myers, Josh Miller, and I began an extremely precise survey of the Nike Precinct. Using a total station, we first took points mapping the elevation changes across the Nike Precinct and the surrounding retaining walls. Then we focused on the foundations, mapping each ashlar block individually. Once the foundations were surveyed Alexander and I moved onto the large boulders of basalt within the Precinct. Smaller fieldstones, also basalt, were used as packing between courses of the ashlar blocks. In many areas, especially the eastern wall, few ashlar blocks are extant; the packing, however, is still present and gives us a visual guide to where the foundation once stood. Josh and I surveyed many of these packing stones, some no larger than a closed fist, to generate points for a digital section of the Nike foundation. We also captured points across the packing which once served as part of the support for the Rhodian marble ship base of the Nike statue. 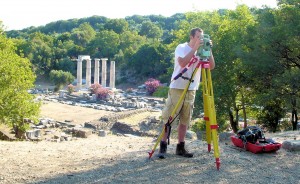 Zach using the total station with the Hieron in the background.

The points measure elevation, latitude, and longitude and contribute to building accurate 3D models of the Sanctuary in programs such as AutoCAD and Rhino 5.0. Detailed surveys, like that of the Nike Precinct, allow us to analyze small areas accurately. For example, the Nike Precinct slopes down from east to west: not only are the western foundations slightly lower than their surviving eastern counterparts, but the surrounding retaining wall begins at a lower elevation on the west. By capturing points across the Precinct we can not only establish the overall slope from east to west, but also the minute changes in that slope. 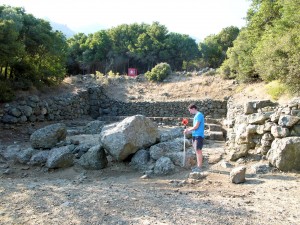 Alexander in the Nike Precinct holding the prism, bouncing the laser back to the total station.

The points further function as a digital map. We have been comparing this map with drawings of the Precinct made in the 1950s and 1980s as well as with earlier sketches by Austrians and French excavators. Since the Nike’s discovery 150 years ago many blocks of the Precinct, present on the earliest sketches, have disappeared. As an investigative and reconstructive tool of the original Precinct, the digital map offers a level of precision and flexibility unavailable to previous excavators. It reveals architectural lines which were unclear and reassesses lines drawn in the 1950s and 1980s. Such lines provide spatial clues as to where courses, crosswalls, and the statue base could have extended.

Another area of GIS focus this season is the stoa on the Western Hill. The stoa is longest building in the Sanctuary, once thought to be ca. 104 meters, but found to be ca. 102 meters by a recent general survey. One purpose of our current survey is to firmly establish this length. Another is to capture points on every block, creating a highly detailed map similar to that of the Nike Precinct.

Much work remains to be done, but the earliest fruits of the surveying can be seen in video walkthroughs of the Sanctuary found at https://www.samothrace.emory.edu/visualizing-the-sanctuary/3-D-walkthroughs.