When it Rains it Roars: Drawing a Lion’s Head Water Spout

Although the main focus of this season is the famous Nike statue and the precinct of the Sanctuary where she once resided, we are also simultaneous completing the study of other parts of the Sanctuary of the Great Gods. One such project is the reconstruction of the so-called Milesian Dedication, a dining hall dedicated by a woman from the ancient city of Miletos. There are only a few more architectural fragments that need to be studied, photographed, and drawn before the building can be published. My first task on the island was to complete the drawing of a lion’s head water spout from this fancy building. It had a Ionic temple front façade with flanking wings where 15 lucky people got to feast after being initiated. 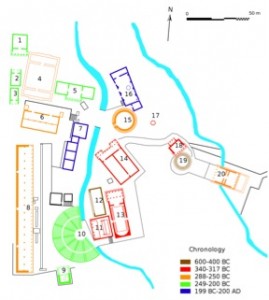 The Milesian Dedication is number five, the three-roomed building in green

Using archaeological reconstruction techniques, we know that the façade looked something like this:

The spout would have been part of a very fancy gutter system, in which rainwater would be funneled away from the roof through marble lion’s mouths. Several buildings in the Sanctuary had lions head water spouts, You can see how this would have operated on the building by viewing intact lions head water spouts, such as this one from 4th century BC from the Temple of Aklepios, Edpidauros, Greece. 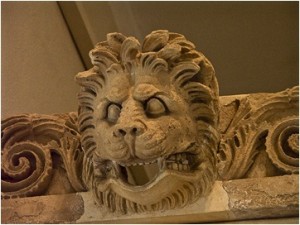 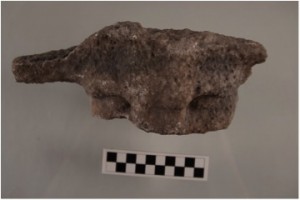 Unfortunately the waterspout from the Milesian Dedication is not in great shape. Only the top half of the lion’s face is preserved, and none of the detail work in the mane or features survives. However, the dimensions of the lions head spout allow us to imagine what it may have looked like when it was complete. The fragment was photographed by Clare, our team photographer. However, it is also important to create a drawing of the spout.

The archaeological drawing corrects for the distortion in the photograph and uses visual shorthand to indicate the “character” of the block: intentional carving, as well as breaks, cracks, or worn areas. Multiple views of the spout are drawn so that scholars and architects who are not able to examine the fragment in person can study it. 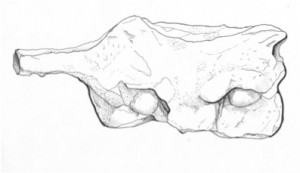 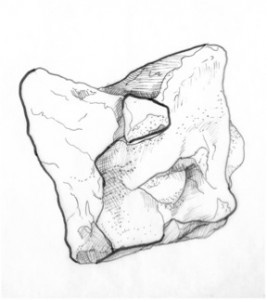 In order to create the drawing, dozens of measurements were recorded from the block and translated to a scaled pencil drawing on graph paper. Then, after the lead architect and Dr. Wescoat approved the drawing, it was inked in pen. The final step will be translating the drawing onto a plastic mylar sheet using special drafting pens.  That final copy will be scanned and used for publication and study. The a fully reconstructed version of the lion’s head spout will be then added to the reconstruction of the Milesian Dedication. The location of the lions head waterspout is indicated by the red arrow below. 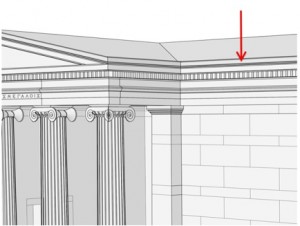