Individual statue bases, built monument bases, and multiple stelai (upright inscriptions on stone slabs) signal that the Theatral Complex was a prime place for public display within the Sanctuary. Based largely on statue base findspots, choice of material, and technical features, it is possible to reconstruct the probable arrangement of the statues in the Theatral Complex. Most of the individual statues originally stood on monument platforms that framed part of the Theatral Circle.  The outer Stepped Retaining Wall supported the statue groups on built monuments as well as individual statues. The 3-D model of the Theatral Complex suggests the dramatic visual impact of this rich and concentrated display. Because none of the bases is inscribed, it is impossible to know the identity of the figures represented.  They are more likely mortals, as opposed to mythological or generic dedications.  The statues on the monument platforms appear to have been set up in clusters.  While the statues may represent religious groups such as initiates into the Mysteries or theoroi (visiting sacred officials), it is more likely that the statues honor benefactors of the Sanctuary.

Statue Base for Statue of a Male 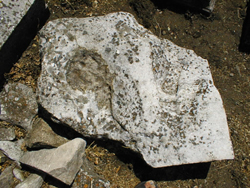 Of the twenty-two surviving statue bases from the Eastern Hill, most are made of imported Thasian marble and consist of a single, unmolded and uninscribed block.  Generally, they have two cuttings for the insertion of tenons supporting life-sized bronze statues.  Statue base T003 is rectangular and bears two foot-shaped cuttings with a slight difference in their position, suggesting that the left leg bore the weight and the right leg was set in front.

Found in clusters scattered behind, on, and in front of Monument Platforms II through V, it is likely that the Thasian marble bases were grouped together on the Monument Platforms II, III, and V.  Excavators discovered base T003 upside down, lodged between the outside of the fifth step of the Theatral Circle and the bridge landing.  It appears that base T003 was flipped off the Monument Platform V during the salvage operation after the final destruction of the Theatral Complex. Deep pick marks around the foot cuttings, evident on a number of bases, bear vivid testimony to attempts to pry the statue from base T003.

Statue Base, possibly for Statue of a Female 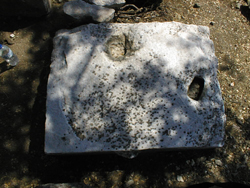 Base T058 is one of three statue bases with cuttings that differ from the majority of bases in the Theatral Complex. The base has two rectangular cuttings. The right cutting is set in advance of the left and close to the front of the base, while the left is angled outward and closer to the midpoint of the block. A shallow, roughly worked groove on the top surface near the back of the block curves in a manner that suggests it was cut to accommodate drapery. It therefore seems most likely that statue base T058 supported a bronze statue of a female. Women in Hellenistic Greece typically wore a chiton, a floor-length tunic. The worked surface on the top of T058 is the area where the marble of the statue’s drapery would have reached the marble of the base. Found on the steps of the Theatral Circle, base T058 probably stood on Monument Platform III or on the southern section of the Stepped Retaining Wall.

Statue Base for Statue of a Male, Contrapposto Stance 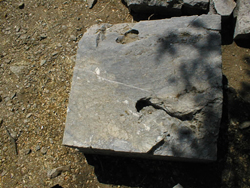 In addition to the Thasian marble bases, the excavators also uncovered nine limestone bases grouped generally in two clusters. Five of the surviving limestone bases were fashioned from a local soft gray limestone, and four, including base T060, were of a harder limestone, either deep gray or white with gray and red veins. Cuttings on the top surface of base T060 indicate a bronze statue of a man standing in contrapposto pose. In this position the figure stands with the weight on one leg with the other leg relaxed and bent at the knee. As a consequence of this shift in weight the figure’s shoulders and torso naturally and subtly twist away from the legs. The foot shaped cutting would have supported the right, weight-bearing leg and the oval cutting behind it indicates where the ball of the left foot would have been attached to the base with a bronze tenon. Statue base T060 was found upside down on the foundation of Platform IV, indicating that salvagers upended the base from its platform after destruction of the Theatral Complex in the late 1st or early 2nd century A.D. Most probably, statue base T060 and up to three other bases stood on Platform IV.