by samothraceadmin
7 years ago
155628 Views
0 Comments

Fragment of an Inscribed Block Supporting a Dedication 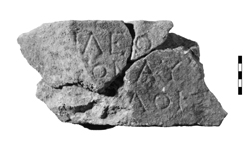 Found in the destruction debris on top of the flagstone paving of the Theatral Circle, this block most likely supported a dedication in honor of a king or member of a royal family.  Although highly fragmentary, the inscription is similar to that on the column monument of Philip V (SEG XXIX 795); possibly this dedication was also made by the Macedonians. From the time of Philip II and Olympias, parents of Alexander the Great, in the second half of the 4th century B.C., the development of the Sanctuary and expansion of the cult of the Megaloi Theoi was closely tied to the Macedonian royal family and the Hellenistic successors of Alexander. The Eastern Hill was a particularly prominent place for dedications, as the many statue bases found in the region attest.

Inscribed Stele, Dedication in Honor of King Lysimachos of Thrace 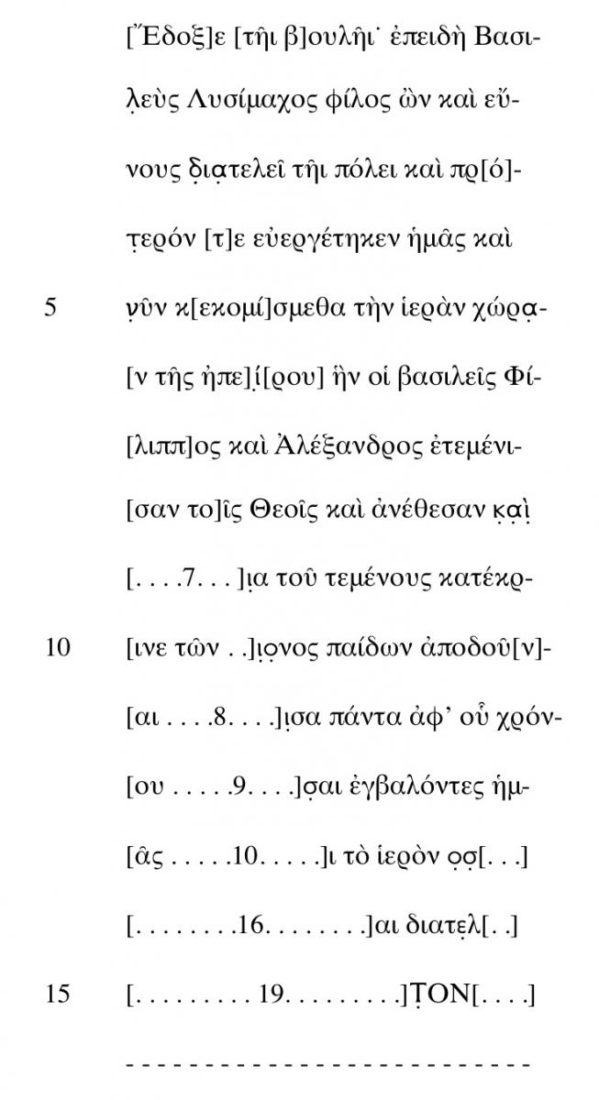 It was decided by the Boule: since King Lysimachos continues to be

friendly and benevolent toward the city and has both granted us

benefactions previously and now has provided us with the sacred territory

and dedicated also [- – -] of the sacred precinct, decided to give the 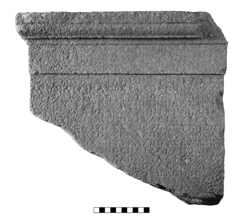 This stele was found in close proximity to the Monument Platforms and was probably originally set up on Platform III or IV.  The crown molding and upper section of the stele, including portions of 15 lines, survive. The stele records a decree of the Βουλή, the council of citizens from a Greek city appointed to run its day-to-day affairs, honoring Lysimachos, one of the generals and successors of Alexander the Great, who became king of Thrace, parts of Asia Minor, and Macedonia.  The decree honors Lysimachos for restoring sacred lands on the mainland originally granted to the Samothracians by Philip and Alexander, either II and III, or III and IV.  Boundary stones for this sacred land have been found on the mainland near the modern city of Alexandroupolis.

The decree describes Lysimachos’ relationship to the Samothracian polis as one of friend and benefactor, a status that probably stems from another event in which Lysimachos rescued the Sanctuary from an attack at night. In thanks, the city of Samothrace decreed an altar to Lysimachos Euergetes (benefactor) for use in annual festivals (IG XIII.8.150). Lysimachos’ availability to help the Samothracians suggests that he was near at hand.  He may well have been an inititate. 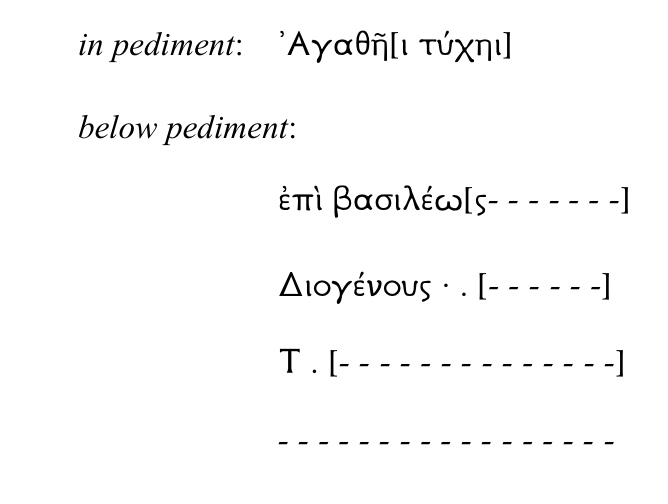 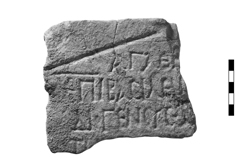 This fragment of a stele or plaque was found on the steps of the Theatral Circle within destruction debris; it may well have been set up on the Eastern Hill, although it is also possible that it was among the massive quantity of earth and debris that was brought in to fill the area after the earthquake of the late 1st/early 2nd century A.D.

An incised pediment crowns the stele, which preserves the opening lines of what was probably a list of initiates into the Mysteries.  At least 138 surviving inscriptions on stone dating to the Hellenistic and Roman periods record the names of initiates. Samothrace is unique in the systematic memorialization of initiation compared with other mystery cult sites.

Usually commissioned by the initiates themselves, inscriptions such as this one are the primary source of information about who was initiated into the Mysteries and where they were from.  While men and women of all social classes, including slaves and kings, traveled great distances from all over the Greek, and later the Roman, world to be initiated, the majority of initiates were from northern Greece and western Asia Minor.

Inscription on Stele, Record of Initiates from Rome, Pessinus, and Smyrna 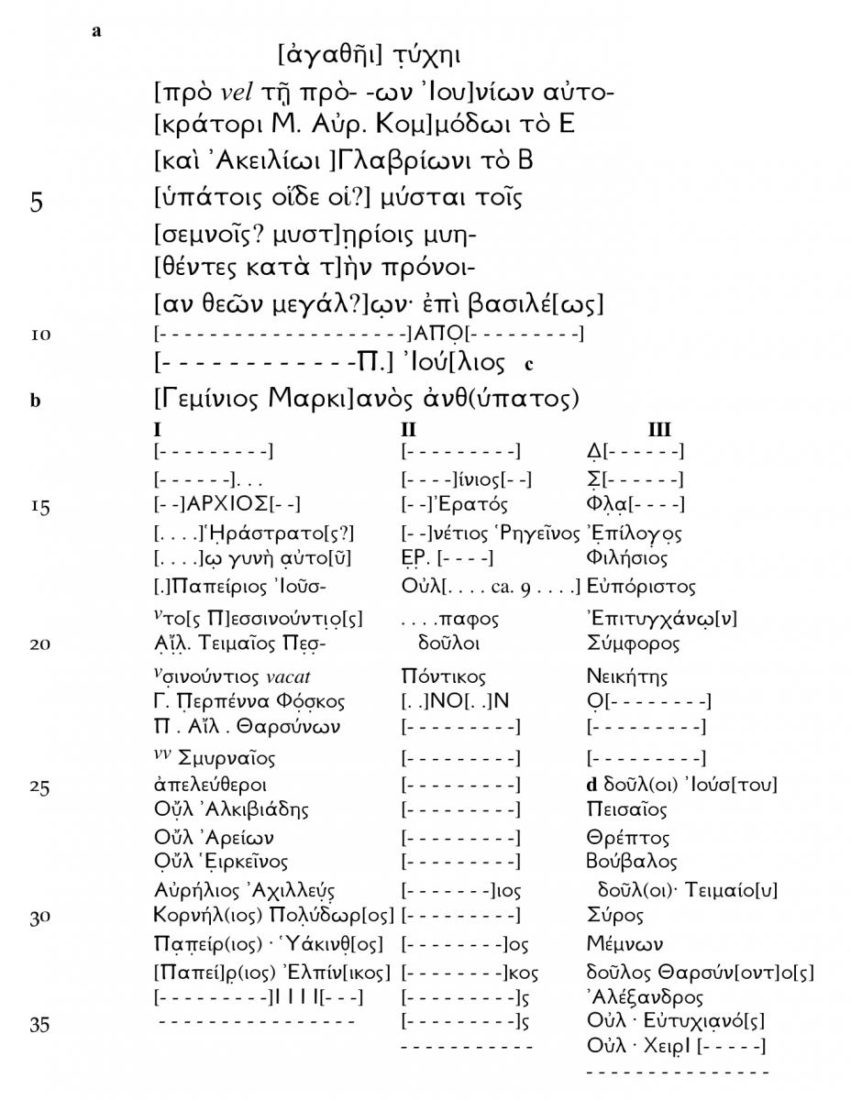 On the ? day before the June Kalends, Ides or Nones, when Emperor M.

the second time, the following initiates were initiated into the [solemn?]

Mysteries according to the will of the Great Gods, in the kingship of [- –

-]. P. Iulius Geminius Marcianus was proconsul. [Follows a list of 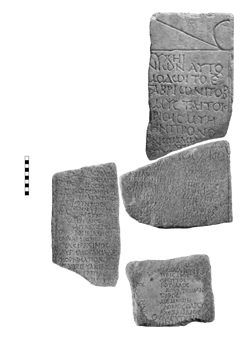 This inscription was broken into pieces and built into a later Roman structure along the Sacred Way.  It is the latest certainly dated list of initiates, although other archaeological and literary evidence proves that the Sanctuary operated well into the 4th century A.D. Roman initiates into the Mysteries, like those whose names are inscribed on this stele, include citizens, freedmen, and slaves.  Roman military personnel, Roman administrators living in the provinces of the Roman Empire, or private Roman citizens residing or traveling in the east are among the initiates whose names appear on the lists. While this inscription is in Greek, other records of initiation and other inscriptions in Latin also survive, attesting further to the importance of the Sanctuary in the Roman period.