The formal Sacred Way led pilgrims from the ancient city to the Propylon of Ptolemy II, into the Theatral Circle, around the Dedication of Philip III and Alexander IV, past the Ionic Porch, and down the steep slope to the center of the Sanctuary.  The path was necessarily altered as the Sanctuary developed.  Originally, the Sacred Way passed through the center of the Theatral Circle, exiting through a passage in the steps.  In the early 4thcentury, however, the passage was blocked (with stones that are not quite the same material, as one can see on the model) and the path was taken around the great bedrock outcropping.  In its most developed form, the Sacred Way was paved, mostly with reused materials, to become a stepped ramp.  To maintain the most direct descent, it cut rather deeply into the hillside, which was retained on both sides with boulders.  This configuration both allowed for a less steep descent and gave the pilgrims the feeling of walking into the earth as they descended into the central valley.  The Sacred Way ended with a narrow passage between the Hall of Choral Dancers and the Rotunda, where it opened into a small plateia. 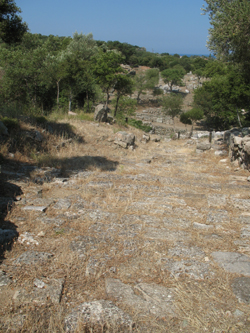