(6) Banqueting Hall dedicated by a Woman from Miletos 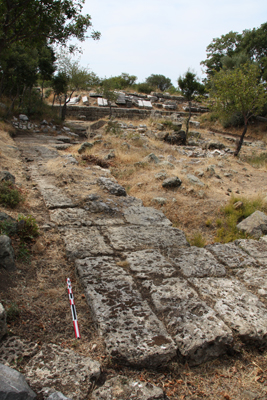 This unusual three-chambered building occupies the northern side of the Western Hill.  It faces south and consists of a central open chamber with a hexastyle (six columns) prostyle Ionic façade, which provides access to the slightly smaller chambers that flank each side.  The west and central chambers rest on natural soil, but a deep foundation of 14 courses had to be constructed for the eastern chamber, which crossed into the ravine cut by the central torrent through the center of the Sanctuary.  The foundations of the building consist of a variety of materials including porous sandstone, andesite, reused andesite porphyry, and a highly friable gray limestone.  The ordered part of the superstructure was built of Thasian marble.  Some marble wall blocks also survive, but it is possible that sections of the wall were composed of porous sandstone covered with stucco.  The design of the entablature follows Samothracian tradition in combining epistyle, frieze, and dentils.  The proportions and design of this part of the building reflect Hellenistic and particularly Macedonian practice. The remains of the epistyle and anta prove that while the side rooms were smaller, they rose to the same height as the main chamber and were tied together aesthetically by the entablature which wrapped around the entire structure.  The side chambers were entered from the main chamber through large, off-center doorways. 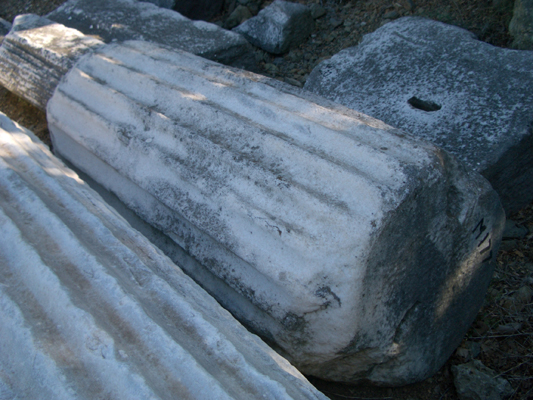 19th century excavators identified this building as a temple.  Its design, however, resembles the three-room suites found in Macedonian palaces at Vergina and Pella and associated with dining facilities.  Our building is most likely a grand dining hall as well.  It is distinctive, however, in being a freestanding structure with a monumental, temple-like façade. The internal dimensions of the side chambers, roughly 8.5 m square, allow for an arrangement of 15 couches. 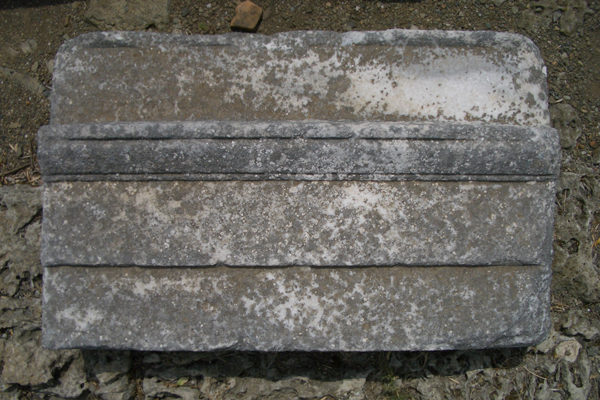 An inscription discovered in the mid-19th century identifies the donor of the building as a private woman from the ancient Greek city of Miletos on the western coast of modern Turkey.  Two further fragments of the inscription have come to light, but they are not enough to determine her name.  While Hellenistic queens are well known as donors of monumental architectural projects (not least Arsinoe II, who gave the Sanctuary its famous Rotunda), the largess of a private woman at this early date and so far from her home, is remarkable.