The construction of the Late Classical Hall of Choral Dancers in the middle of the fourth century B.C. signaled the beginning of a period of great prosperity for the Sanctuary of the Great Gods. The shape of the sanctuary changed dramatically with the substantial remodeling of this building, which became the largest and first entirely marble structure in the sanctuary. 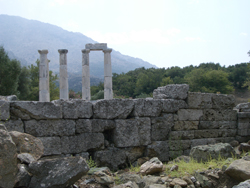 Although parts of the elegant frieze of dancing women that give this building its name were known even to early travelers, such as Cyriacus of Ancona, who toured the island in 1444, the full extent of its architecture and decoration were not fully understood until very recently. The Austrians uncovered the precinct during their excavations in the 1870s.  Following further excavations in the 1950s, Phyllis W. Lehmann reconstructed the structure as an unroofed temenos with a marble-paved terrace and an elaborate Ionic marble propylon with distyle projecting wings (left).  She identified Skopas as designing architect-sculptor and placed the famous statue of Aphrodite and Pothos mentioned by Pliny (Natural History 36.5.5) within the 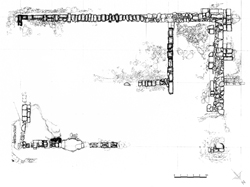 open precinct.
Further excavation by James R. McCredie during the 1990s re­vealed that the building was radically different from Lehmann’s reconstruction. The building did have an Ionic façade with wings, but it belonged to a much grander and more complex, fully roofed building, twice as big and facing north. The revised plan demonstrates that the structure measured an imposing c. 34 m. long by c. 23 m. wide across the façade.  Neither a temenos nor a propylon, the building now has been renamed the Hall of Choral Dancers.

The structure consisted of two deep chambers connected across the northern side by a deep Ionic porch with two projecting wings. The western chamber incorporated an earlier, Archaic predecessor, had a paved marble floor, and included cultic installations like those found in the earlier building, including an eschara (hearth for sacrifices) and a bothros (pit for liquid offerings).  The eastern chamber was newlyconstructed in the fourth century, a situation underscored by the difference in the elevation of its floor, which was made not of marble pavers but of marble chips.

The building is remarkable in both architecture and sculptural embellishment. The slender monolithic shafts of the columns were capped with a decorative necking band and and the finely carved capitals had elegant vegetal bands running across the bolster. The entablature is among the earliest examples combining the traditions of sculpted frieze and banded epistyle of the Attic Ionic order with the dentils characteristic of the Asiatic version of the order. The geison and sima courses were decorated with an elaborate rinceaux pattern carved in relief and lion’s head waterspouts. The porches were crowned with floral akroteria, and there is evidence that the porches also bore sculpted pediments. 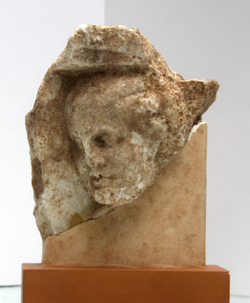 The most elaborate element of the sculptural program is the continuous frieze of hundreds of dancing maidens encircled the entire building. Female musicians, including a citharist, a tympanum player, and a woman with a flute, accompany the dancers. The archaizing style and the circular movement of the procession around the building, converging from opposite directions, may allude to a long tradition of choral dancing on the site.  Lehmann has proposed that the dancing was also suggestive of the legendary wedding of Kadmos and Harmonia.

Another special feature of the Hall of Choral Dancers is the marble coffered ceiling that crowned its porch. The beams of the central section of the porch spanned an impressive 6.35 m. from the inner colonnade to the door wall. At least part of the ceiling was covered with marble coffer lids decorated with sculpted heads in frontal, profile, and three-quarters view positions. Figural motifs in coffer lids were highly unusual, particularly before the Hellenistic period. The choice of materials also speaks to the significance of the sculpted heads; while the rest of the structure was built of Thasian marble, the carved coffer lids were made of marble from Paros. The inclusion of such an extensive ceiling arrangement must have been must have been chosen deliberately to enhance the initiates’ experience of entering the building, because it surely added considerable weight, expense, and effort to its construction. 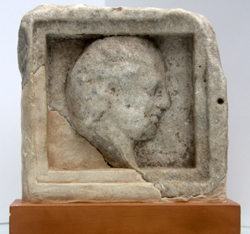 commissioned it. Philip II of Macedon comes immediately to mind, for we know he had a great interest in the sanctuary after he met his future wife (and mother of Alexander), Olympias, there during their initiation. The splendid buildings and monumental dedications later erected in the Sanctuary by the Hellenistic successors of Alexander strongly suggest that Samothrace was a key element of the Macedonian legacy. As the first and largest of these lavish buildings, the Hall of Choral Dancers marks a turning point in the fortune of the Sanctuary of the Great Gods.