The Altar Court, an unroofed rectangular enclosure, stands to the south of the Hall of Votive Gifts, between the Hieron and the Theater. The structure rests on a foundation composed of large blocks of local gray-brown marine limestone. The building faces westward toward the Theater, and its Thasian marble facade consists of a Doric colonnade of four columns framed by returning walls.  The side (northern and southern) and back (eastern) walls were built with local limestone blocks finished with plaster.  On the facade, metal grills ran across the the intercolumniations to control access into the enclosed precinct. The walls were capped with a marble course (epikranitis) that carried the crown molding of anta capitals around the entire structure. Although unroofed, the building carried a full entablature. 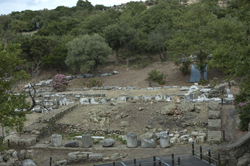 According to the excavator, Karl Lehmann, the precinct enclosed a large outcropping of dark red porphyry, which had served as a sacrificial platform in the Archaic period.  When the Altar Court was built, the outcropping was covered with marble slabs to create a monumental altar approaced by an ascending staircase.  The floor of the front part of the enclosure was covered with small, diamond-shaped marble plaving stones, in a pattern similar to the central section of the floor of the Dedication of Philip III and Alexander IV.

Although several large fragments of the dedicatory inscription carved on the epistyle survive, there is some debate concerning the donor. K. Lehmann restored the name of the donor as Arrhidaios and linked the building with Philip III Arrhidaios, the half brother of Alexander the Great.  However, noting that Lehmann’s restoration of the extant letters required an unusual spelling, P.M. Fraser suggested a simpler interpretation of the extant letters, instead restoring the dedicator’s name as Adaios. 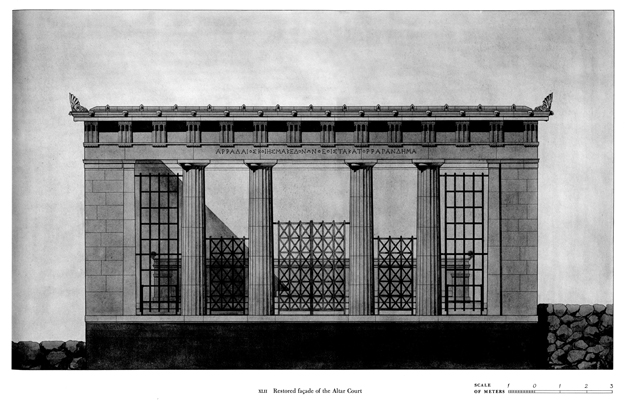 The Altar Court’s orientation and proximity to the Theater suggests the buildings were in close communication.  The Altar Court may have provided a kind of skene, or backdrop, for theatrical performances.  The Theater may also have served as a gathering place to witness the rituals performed in the Altar Court.

In current investigations, we are exploring more precisely the relationship between the Altar Court, the Theater, and the large terrace to the south of the Heiron and Altar Court.