(11b) Monuments on the Stoa Terrace

In front of the Stoa’s façade are the remains of at least eight monument bases, which demonstrate that the Stoa Terrace was a significant nexus for honorific and votive dedication, perhaps second only to the Entrance Complex on the Eastern Hill. The row of monuments transformed the visitor’s experience of the Stoa Terrace by providing visual and physical connections with the neighboring Nike Precinct, Theater, and Central Sanctuary, as well as facilitating access to maritime vistas to the north. While at least one of the monuments honored a Macedonian king, the number and scale of the monuments shows robust commemorative practices of non-royal patrons as well. Dedicators asserted their presence and aggrandized their gifts by using imported marbles, jockeying for prominent positions, and maximizing vistas.

Aerial view of the Stoa Terrace and monuments, 2017. 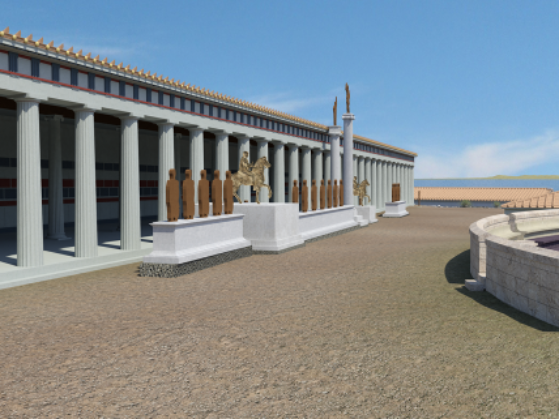 From the earliest modern investigations of the Sanctuary, researchers recognized that the Stoa shared its terrace with numerous monumental dedications, which were all set up after the construction of the Stoa in the mid 3rd century. In 1875, Austrian excavators uncovered five monument platforms (I, II, III, V, and B) on the terrace east of the Stoa. The Austrians published a restored elevation of Monument V, a long, narrow orthostate monument (6.42 by 1.33 m). It is clear from sockets in the two surviving crown blocks of Proconnesian marble that Monument V supported over-life-sized bronze statutes. The sockets for the bronze statues belong to one male figure and one female figure, but there were likely at least four more statues on the base. 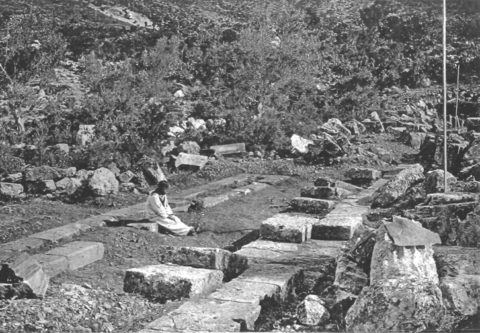 Euthynteria course of Monument B during Austrian excavation.

When the American Excavations directed by McCredie returned to excavate the Stoa in 1962-1964 the team documented the platforms of Monuments IV and VI as well as the remains of the towering votive column monument of Philip V, dedicated by the Macedonians to the Great Gods around 200 B.C.E. Consisting of four column drums and a Doric capital, the column was surmounted by an inscribed base with cuttings for the statue’s feet showing that the statue was a bronze, over-life-sized, heroic sculpture of Philip V. Pieces of an Ionic column found clustered around the platform of Monument III may belong to a second votive column. 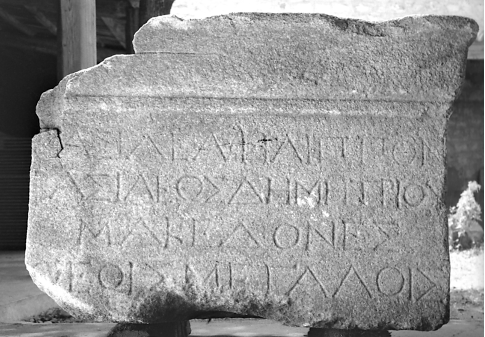 In addition to Monument  V, three more orthostate monuments (B, VI, and VII) adorned the Stoa Terrace. Of those, the best preserved in the Sanctuary is Monument VI, which was built next to the southeast corner of the Stoa and stretches east-west toward the Nike with dimensions of 6.07 by 1.07 m. While plinths with foot cuttings have not survived for Monument VI, the orthostate base likely supported up to six statues or other dedications such as tripods. The profiles of the base and crown moldings of Monument VI were popular in the second century B.C.E. throughout the Greek world and may be found elsewhere in the Sanctuary such as on Orthostate Monument I in the Entrance Complex.

Among the trove of marble blocks and fragments associated with the Stoa Monuments, two small Ionic cornice blocks are also noteworthy. With one block in a brilliant white marble and the other in a dark bluish gray marble, the blocks constitute the crowning courses of two monuments and give some idea of the grandeur and visual variety of the original display. Moreover, the blocks attest to monument types in addition to votive columns and orthostate monuments. For example, restored atop the platform of Monument V, the bluish grey Ionic cornice block may have formed the crowning course of a pillar or pedestal monument. 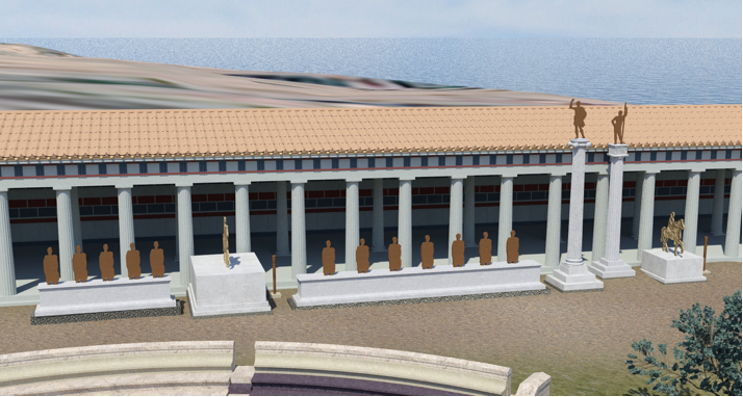