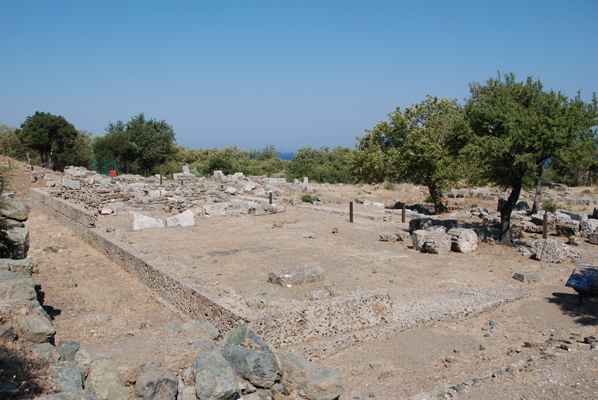 The Neorion built on the Western Hill originally sheltered and displayed an entire ship dedicated to the Great Gods.  Set on a terrace between the higher Stoa to the south and the unfinished Building A to the north, this enormous votive stood in close proximity to the plateia in the heart of the Sanctuary formed by the Hall of Choral Dancers and the Rotunda.  A broad flight of stairs led from the main plateia to the terrace in front of the building.   At the time of the Neorion’s construction, work on Building A had been abandoned and the construction of the Milesian Dedication had not yet begun, so the pilgrim would have had an excellent view of the sea from this terrace. 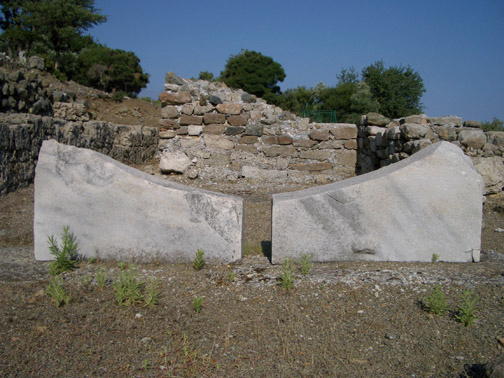 The building consists of a rectangular hall divided into two equal longitudinal chambers by a row of fivecolumns connected by a wooden grill set on marble rails.  Visitors entered the northern chamber through two monumental doors with full Doric entablatures that were set on the long north face of the structure.  While most of the structure was constructed in local porous sandstone covered with plaster, these handsome doorframes were made of imported Thasian marble.  Their design reflects Macedonian architectural ideas. 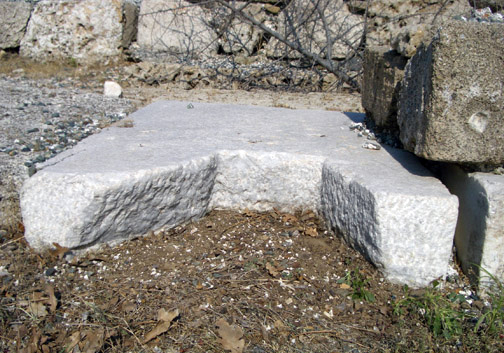 The ship occupied the full length of the southern chamber.   Seven Thasian marble supports, graduated in size, held the hull in place. The orientation of the building and the position of the grill and columns restricted the view of the ship to only one side.  The dimensions of the chamber allow for a ship up to 27 m in length, but not much more than 4 m in width.  The supports indicate that the ship had a roughly symmetrical keel.  The precise type of ship dedicated in the Neorion remains uncertain.  If it were a military vessel, it would have been a lighter class of ship such as a hemiolia or a lembos. However, we should not rule out the possibility of other kinds of vessel. 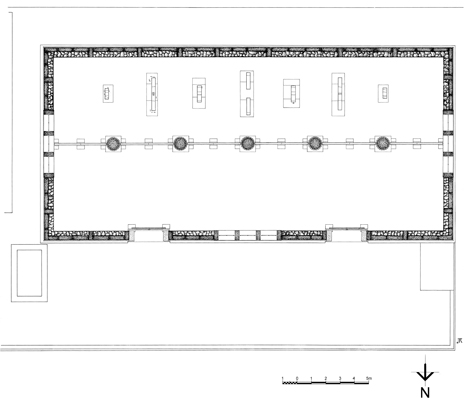 In terms of construction, the ship must have been hauled into the Sanctuary and set up on the marblesupports; the building was then constructed around it.  The interior walls were decorated with colored plaster imitating drafted margin masonry.  There is evidence for several large windows but their exact position remains conjectural.  The northern chamber contains a small base that was found in the eastern corner of the room, indicating that this chamber also held dedications. 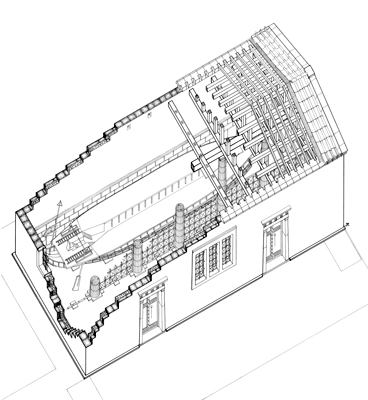 Offering an entire ship to the Great Gods was an act of great largess, one that strongly suggests a prominent and powerful patron.  Unfortunately, it is difficult to fix on the donor or the occasion.  Several theories are possible. The Neorion could have housed a ship captured in battle, or one that brought victory, salvation or profit.  While stone bases supporting ships have been found in the Sanctuary of Hera on Samos and on the island of Thasos, the only other known building designed to house a votive ship is in the Sanctuary of Apollo at Delos (the Monument of the Bulls).

Wescoat, B. D.  2005. “Buildings for Votive Ships on Delos and Samothrace,” in Architecture and Archaeology in the Cyclades, Papers in Honour of J. J. Coulton, ed. M. Yeloulanou and M. Samatopoulou, Oxford, pp. 153-172.